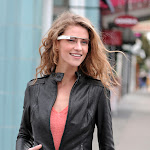 The dystopian possibilities of Project Glass are not enough to discourage innovation. Here comes your heads up display and real time video feed, possibly followed by large scale social behavior implications. I’m still on the fence as to whether Project Glass is an April Fools hoax, but after considering the possibilities, I’ve come to the conclusion that even if it is a joke now, they are an inevitable innovation, and things aren’t going to be the same. Here they are:   Here’s a video that explains the dream. Heads up display, with a phone, video capabilities, voice commands and Google services integrated.

Here’s a photo of one of the Google founders (supposedly) wearing them. They are definitely an evolution from what one traditionally associates with virtual reality.

The concept is mind boggling. Gawker calls them “the creepiest tech of the millennium,” and Forbes observes that Google Glasses “make a persistent, pervasive surveillance state inevitable.” You don’t have to think hard to consider abuse. The locker room. Bars. Dating. Job interviews. These things would never be the same. Enough said. I keep thinking this has to be a hoax. Then I see this mashup. The advertising possibilities being mocked in conjunction with the novelty of mapping, streaming video and local services make this seem simply inevitable. So, let’s imagine that these could be coming soon. We consider that they could lead to a dystopian police state. Also, inevitably, one will be marketed to in real time. One would think it’s impossible until you consider the applications. Streaming stats at sports events, integration with Snaptags at conferences, real estate shopping with augmented reality. It’s too interesting of an idea for technologists and consumers to resist, whatever the privacy concerns. I’m not a cynic, but I’m a realist. How could they not be real?